Human Immunodeficiency virus (HIV) infects one in every 200 people, infecting over 36 million people worldwide. Almost two thirds of the infections occur in eastern and southern Africa. In the US, it is estimated that more than 1.2 million people are living with HIV. As of 2019, Washington DC has one of the highest rate of infection in the US, with an estimated 1.8% rate.

After initial infection, HIV replicates and depletes CD4 T cells, leading to the deterioration of the immune system. In the absence of treatment, the disease progresses into Acquired Immunodeficiency Syndrome (AIDS). During AIDS, HIV infected individuals became susceptible to opportunistic infections by parasites (i.e. Toxoplasma spp.), Fungi (i.e. Candida spp.), or viruses (i.e. Herpes virus HHV-8, causative agent of Kaposi’s sarcoma). The decrease of the immune defenses and the increase in opportunistic infections leads to death. More than 34 million people have died of HIV/AIDS worldwide. 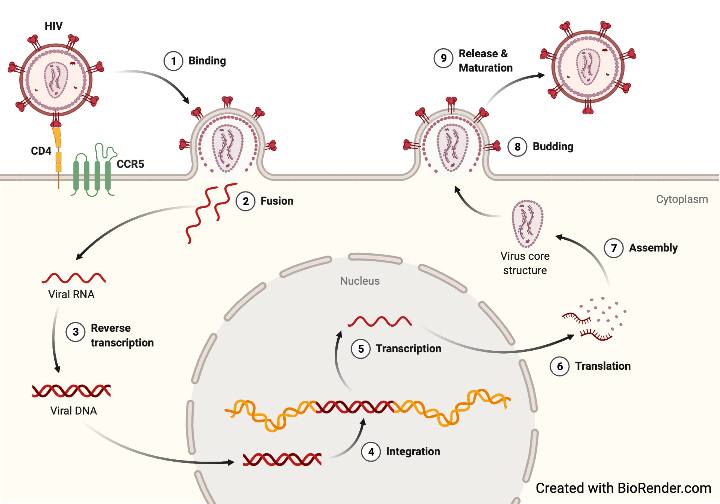 Treatment against HIV is available since the mid 90s. Current anti-retroviral therapy (ART) requires a daily administration of a combination of drugs to target different steps in HIV life cycle. This has transformed the disease from deadly to chronic.

HIV is a single-stranded, positive-sense RNA virus (ssRNA). After infection, HIV undergoes reverse transcription and transform their RNA into double-stranded DNA (dsDNA). HIV dsDNA is then integrated into the human genome. Once it is integrated, HIV can undergo transcription using the cellular machinery. Transcription leads to the production of new HIV proteins as well as its genome for the generation of new progeny virus. HIV can also remain transcriptionally silent until further stimulation. In this case, HIV become latent and invisible to the immune system as well as current therapy.

In spite of its success, ART is not curative. Discontinuing therapy leads to the rebound in viremia and the progression of the disease. This is due to the present of a small number of cells in which HIV can hide from the action of the immune system and current therapies. These cells are latently infected with HIV and form a small and long-lived reservoir of HIV. Efforts are made worldwide towards designing therapies to eliminate this reservoir. Two different cure scenarios are actively being pursued. First, a sterilization cure in which the latent reservoir is completely eliminated. An example of this strategy are the “Berlin” and “London” patients. These patients are the only reported cases to date of individuals cure of HIV. Second, a functional cure in which the infection is not completely eliminated but it is controlled by the patient’s own immune system in the absence of ART. This has been observed in some patients like the VISCONTI study. There are several different approaches, both genetic and pharmacologic, that are being explored towards achieving this goal.

The Bosque lab is seeking to understand the mechanisms that (a) control the establishment of HIV latency, (b) induce reactivation of latent viruses and (c) enhance the clearance of the latent reservoir. These studies are directed towards the development of curative strategies towards HIV-1. 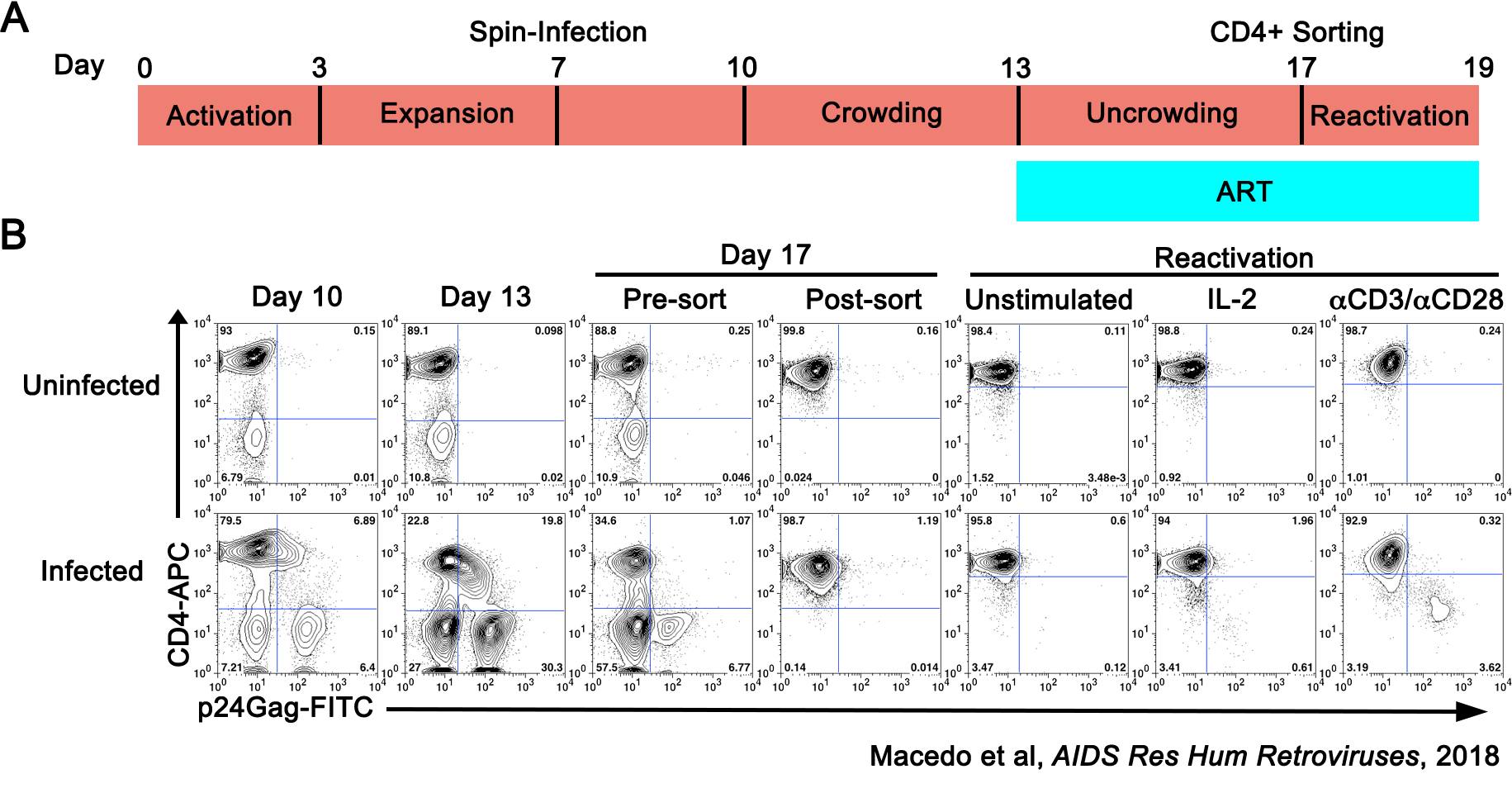 In order to develop successful HIV cure interventions, the basic mechanisms underlying latency establishment and reversal must be known. Mechanistic studies are difficult to carry out in samples from people living with HIV (PLWH) due to the availability of sample and the scarcity of these cells in vivo; thus, cell lines and primary cell models serve an important purpose in understanding the biology of HIV-1 latency. Our group has extensively characterized a primary model of latency that uses CD4T cells isolated from HIV-negative donors (Bosque and Planelles, Blood, 2009; Macedo et al, AIDS Res Hum Retroviruses, 2018; Sarabia et al, Journal of Virology, 2021). This model has been extensively used to discover and evaluate latency-reversing agents (LRAs); to perform mechanistic studies examining pathways involved in the establishment and maintenance of latency; and has several similitudes when compared with the reservoir in PLWH including similar integration patterns, clonal expansion and blocks in HIV-1 splicing. As such, this model could be used to further understand the mechanisms involved in HIV persistence in CD4 T cells as well as the pre-clinical evaluation of HIV cure strategies.

Discovering and characterizing latency-reversing agents and immunoenhancers to eradicate HIV 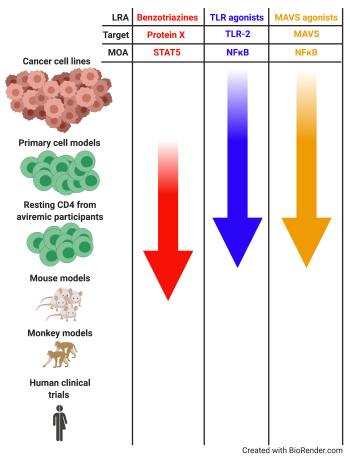 A strategy towards HIV eradication relay in the reactivation of latent HIV-1 followed by the clearance of the reactivated cell (“shock and kill” strategies). Compounds that reactivate latent HIV are called latency-reversing agents (LRAs) and several classes of compounds are being investigated (HDAC inhibitors, PKC agonists, etc.). We have discovered and characterized two families of compounds that can reactivate and reduce latent HIV in vitro. Benzotriazole and benzotriazine derivatives have the ability to reactivate latent HIV, being benzotriazine derivatives 100 times more active than benzotriazoles (Bosque et al, Cell Reports, 2017; Sorensen et al, Antimicrobial Agents and Chemotherapy, 2020). Mechanistic studies showed that these compounds enhance STAT5 phosphorylation, increasing STAT5’s transcriptional activity and occupancy of the HIV-1 LTR. Our research is now interested in continuing preclinical studies both in vitro and in vivo.

Interferons plays a crucial role in the cellular antiviral response. All the interferons mediate their signal through the activation of STAT1 and STAT2, which lead to the expression of Interferon-Stimulated Genes (ISGs). As such, we are evaluating the potential of manipulating this pathway with benzotriazine derivatives as novel antiviral drugs for HIV and other viral infections.

Pathogen recognition receptors (PRRs) are part of the innate immune system. This first line of defense recognize pathogen associated molecular patterns (PAMPs) or damage associated molecular patterns (DAMPs). PRRs represent a relevant target to be used for HIV-1 eradication for two reasons. First, it has been shown that several Toll-like receptors (TLR) agonists, a class of PRRs, have the ability to reactivate latent HIV-1. Among others, we have shown that TLR-2 agonists and dual TLR-2/7 agonists can reactivate latent HIV-1 in CD4 T cells (Novis et al, Retrovirology, 2013; Macedo et al, JCI Insight, 2018). Furthermore, we have discovered that RIG-I agonists can reactivate HIV-1 and that chemical manipulation of the mitochondrial antiviral signaling protein (MAVS), a downstream effector protein of RIG-I, can reactivate latent HIV in CD4 T cells (Sarabia, Novis et al, Frontiers in Immunology, 2021). Second, PAMPS increase immune activation. Therefore, targeting PRRs may act cooperatively by reactivating latent HIV and also boosting immune responses to promote viral clearance. Several PRR ligands are being investigated or in clinical trials to enhance immunity for the use in treatment of cancer, viral infection and bacterial infection (Macedo et al, Frontiers in Immunology, 2019). Our research is directed in characterizing PRR ligands and related pathways that can both reactivate latent HIV-1 in resting CD4 T cells as well as enhance immune responses.

The development of HIV cure strategies must account for different populations and whether the efficacy of these strategies might vary because of different biological factors attributed to these populations. One of the biological factors that could contribute or interfere with these strategies are sex hormones. Sex hormones, including estrogen, testosterone and progesterone, are critical mediators of sexual development. Besides their main role in sexual development, sex hormone receptors are present in immune cells and can influence HIV infection, HIV transcription as well as immune cell functions. Currently, we are limited in our knowledge as to what extent all sex hormones can influence the establishment of HIV latency as well as ’shock and kill’ strategies. Furthermore, transgender populations are at a higher risk of HIV infection and will benefit of cure interventions.  However, whether hormonal replacement therapies used in the current standard of care in transgender people could influence HIV cure strategies is unknown.  Our lab is investigating whether and how sex hormones and hormonal replacement therapies influence cure strategies. This is crucial in the development of therapeutic interventions aimed towards a global and inclusive HIV cure in PLWH, including women and transgender.