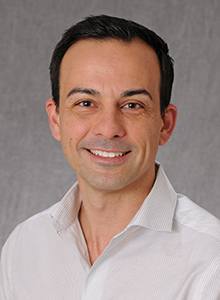 Alberto Bosque, Ph.D., M.B.A., joined the George Washington University in November 2016 as Assistant Professor in the Department of Microbiology, Immunology and Tropical Medicine. He is a biochemist with considerable experience in cell biology and signal transduction. Dr. Bosque received his Bachelor’s degree in Biochemistry with high honors from the University of Zaragoza, Spain in 2001. During his graduate studies at the University of Zaragoza in the laboratory of Dr. Alberto Anel, he studied the mechanisms of downregulation of human T cell immune responses and their implication to Autoimmune Lymphoproliferative Syndromes (ALPS). After obtaining a Ph.D. in Biochemistry and Molecular and Cellular Biology with honors “cum laude”, Dr. Bosque moved to the US and joined the laboratory of Dr. Vicente Planelles at the University of Utah, first with a postdoctoral fellowship from the Spanish Government followed by a Mathilde Krim Postdoctoral Fellowship from The Foundation for AIDS Research (amfAR). During his postdoctoral studies, he developed one of the first primary cell models of HIV-1 latency (Bosque and Planelles, Blood, 2009). In 2011, Dr. Bosque became a Research Assistant Professor at the University of Utah and in 2015 an Assistant Professor. During his time as Faculty at the University of Utah, he also completed with honors a Master Degree in Business Administration (M.B.A.). Dr. Bosque is an Associate Professor in the Department of Microbiology, Immunology & Tropical Medicine at GW. Dr. Bosque has been involved in HIV cure research for the last 15 years focusing on the discovery and characterization of signaling pathways that can both reactivate latent HIV-1 in resting CD4+ T cells and enhance immune effector functions of NK and CD8+ T cells. He has a long-standing funding record as Principal Investigator in HIV cure research, including a Grand Challenges Exploration from the Bill and Melinda Gates Foundation as well as an R21, R21/R33, R56 and two R01s from NIAID, and several other grants as collaborator.

A. During my doctoral training, I worked on characterizing the role of pro- and anti-apoptotic proteins in the down-modulation of the T cell immune response. My work focused on understanding how these proteins are regulated in human T cells and how its regulation is important for autoimmune lymphoproliferative syndromes (ALPS). In particular, I characterized a novel signaling pathway that connects the two main signaling routs that control T-cell activation: death receptor-mediated activation-induced cell death and apoptosis by cytokine deprivation.

B. My doctoral training gave me expertise working with human primary lymphocytes. I used this expertise to generate one of the first primary cell models of HIV-1 latency. This model has become a suitable model to study the mechanism that are involved in the establishment and reactivation of latent HIV-1. Using this model, I characterized the signaling pathway that leads to viral reactivation after antigen stimulation. Furthermore, I characterized the role of homeostatic proliferation as a means to perpetuate and possibly expand the latent reservoir. Recently, we have uncovered a novel mechanism controlling HIV-1 latency. Using RNA-seq, we discovered that HIV-1 infection leads to the transcriptional activation of p53. Inhibition of the transcriptional activation of p53 using pifithrin-, a specific chemical inhibitor, leads to the silencing of the latent reservoir. Finally, this model allows to study the role of other biological variables such as sex and age influence the establishment and reactivation of the latent reservoir.

C. My research has also been actively involved in discovering and characterizing LRAs. In particular, my lab is investigating two different “shock and kill” strategies towards HIV eradication. One is the use of Pathogen Recognition Receptor agonists and the other one is to modulate STAT5 activity using a novel family of compounds that we have recently characterized.

D. Furthermore, my lab has been actively collaborating with researchers at GW and in other institutions to further characterize other mechanisms involved in HIV latency and persistence.